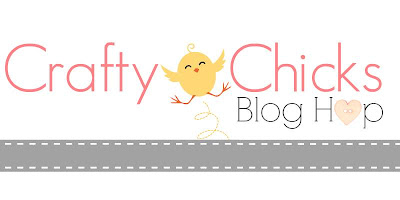 It's time for a blog hop!  The Crafty Chicks Blog Hop, to be exact :)
I've always thought this concept of the blog hop was kind of fun and exciting, and now I get to band together with a group of awesome designers to showcase our creations, to bring fun and inspiration to all!  Hip, hip, hooray!

So here's the deal:  Every month we'll have a different theme, and offer a prize to one lucky winner.  If you would like to qualify to win the prize, just leave a comment on each blogger's site.  You have one week, until June 22nd, to comment on all the blog stops.  Then, on the rafflecopter below, click "did it."  That's it!  After you do that, a bunch of other options to earn more entries will appear, if you feel so inclined.  One is a scavenger hunt to find our crafty chick mascot in one of the project photos on the hop...just leave a comment in the rafflecopter letting us know where she is! The prize winner will be announced on June 24th on Elizabeth's blog.  We will also contact the winner, so make sure your comment includes your contact info.  The winner will have one week to claim their prize or another winner will be chosen.

The prize being offered this month is a fabulous mini album kit from Archiver's.  It's called Daily Junque, and it's a Pink Paislee creation.  Check it out:

And now, on with the Crafty Chicks Wedding Hop!
******{{You're probably coming from Valerie's page, but if you stumbled across this page, and you want to start at the beginning of our Hop, go  here }}******
Whew!  Now that we're through all the fine print (conveniently made to be not-so-fine, for your reading pleasure), we're on to the project!  For my project, I made a rogue stop at Archiver's this week to pick up a few things.  As a general rule, I don't keep much on hand in the way of wedding project supplies...people are so particular about colors and themes for weddings, so I usually just pick up items for the specific project I'm working on.  Also, I had a serious shopping bug,, so that was pretty inspirational in making the extra stop instead of scavenging for supplies that I surely already had at home :)  Thankfully, I managed to get out of there with my pocketbook (mostly) intact.  I decided on making a card, mostly because I'm single and therefore don't have wedding pictures of my own...and didn't have time this week to track down permission from friends to use their wedding photos on my blog! lol. So here it is:
Front: 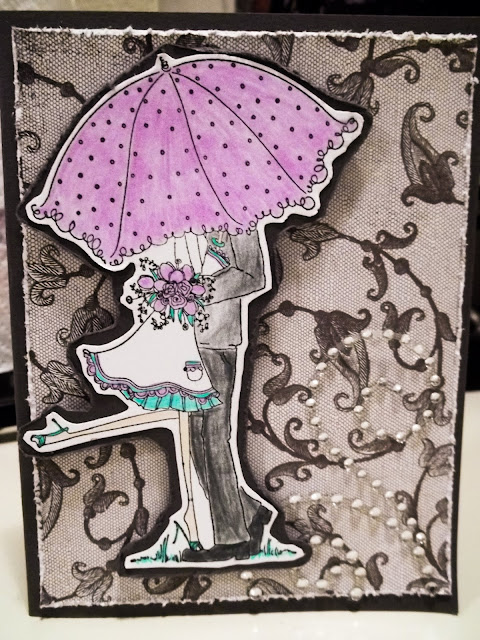 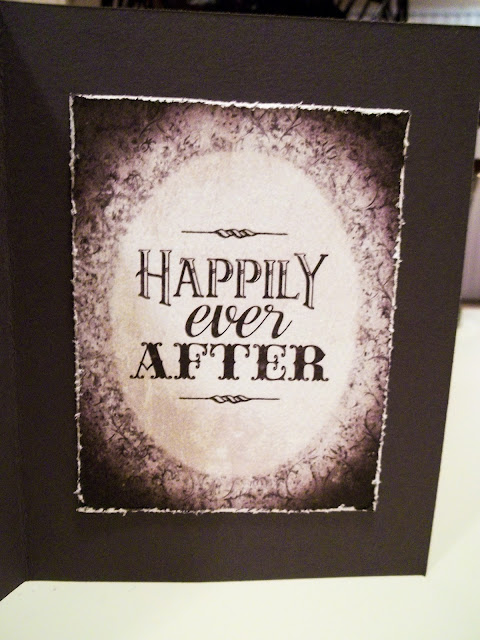 I just roughed up all the edges with a scissors.  I actually have a specific tool to do that with, but it just never looks right...it doesn't get them rough enough.  (On the other hand, the odds of me taking a giant slice out of the paper I'm roughing up increases exponentially when I'm using a scissors...alas...no risk, no reward, right?  lol).  I chopped up a large gem flourish into smaller bits, and used one of the smaller pieces on the corner.  I had to convince myself to stop there so it didn't get too crazy...I was feeling extremely bling-y at the time :)  I had originally intended to blend all the colored pencil out with Gamsol, but I wound up liking how it looked kind of "sketch-y" without the blending, so I left it at that.

I'm pretty happy with how it turned out overall.  I'm vaguely obsessed with this pink and green thing right now...I don't know why.  It keeps popping up in all my ideas lately.  I like the contrast of the whimsical stamp and the serious paper...it's a little bit formal and a little bit cutesy.  If you read my blog much, you know that cutesy is pretty much my schtick ;)  lol.
And that's all for my post this time around.  It's been super crazy at work lately, but I have best intentions to start posting crafty stuff more regularly again...I'm woefully behind on at least a half a dozen projects at the moment, so there should be plenty to post once I get my butt moving again!
If you're continuing on the Hop, head on over to Heidi's blog next.
Hope ya'll enjoy our first hop...many more to come :)

Megan
Let's see...I'm a very creative person with a very creative career. However, it seems that all of my creative energy is spent at work leaving nothing when I get home. So, I'm starting this blog to re-inspire myself, and maybe inspire others if they happen to show up :)